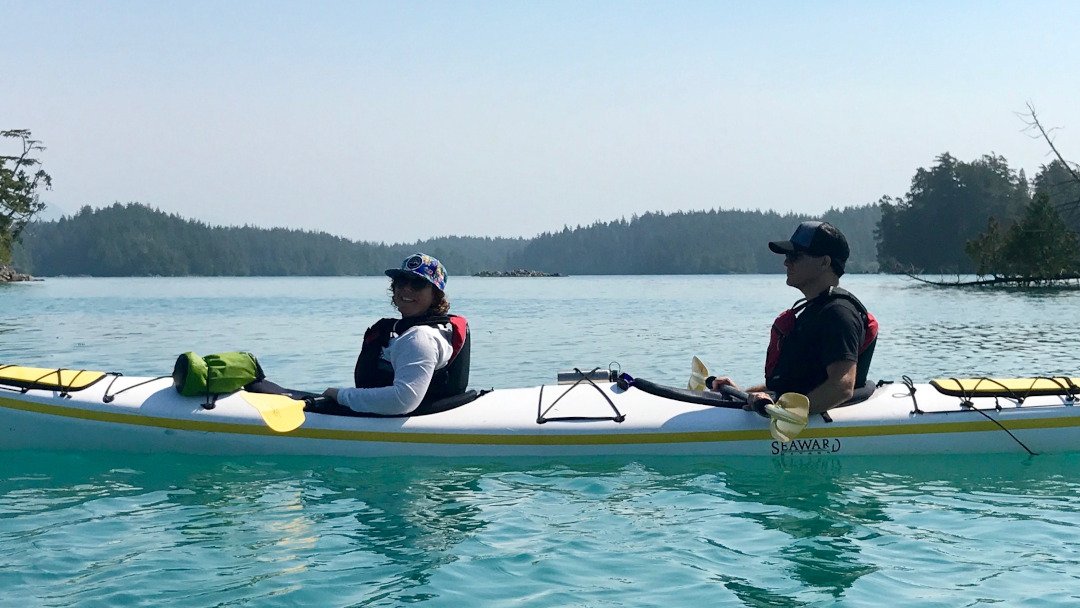 Quite a few people seem to suffer from what we call double-kayakaphobia, which we truly believe can only come from not having paddled the right double kayaks, or possibly from traumatic childhood experiences with 2-person canoes. The much maligned tandem kayak is often referred to as a “divorce boat” but there are a lot of reasons why double kayaks are the right choice for many paddlers and for expeditions, especially where the frigid water temperatures leave no room for error.

At Hello Nature Adventure Tours we paddle touring double sea kayaks with spray skirts and foot-peg operated rudders. Most of our double kayaks are made by Seaward Kayaks. They are stable, fast, easy to paddle, fun to roll (don’t worry that’s not required for tours) and they allow us to share the joys of kayaking in this amazing place with folks who might never have paddled on the ocean before..

We believe in kayaks that are fun to paddle and our long, sleek touring doubles are designed to make paddling on the ocean both enjoyable and easy. Unlike the sit-on top kayaks used in warm climates, a sea kayak has a cockpit that can be enclosed with a spray skirt. The spray skirt keeps water from drips and waves out of the kayak and helps keep paddlers dry. Too much water inside a kayak makes it unstable and even though it may be 24 degrees on a sunny day here, the water temperature never rises much above 12. No one wants to sit in a kayak full of cold water, so we always use spray skirts on our kayaks.

Touring doubles are much easier to steer than 2 person canoes. The person in the back of the kayak steers with their feet. The rudder system is simple: cables connect the footpegs to the rudder so you press on the left foot to turn the kayak left and press on the right foot to turn the kayak right. We use the rudder instead of paddle strokes to turn the kayak, so there is no need for paddlers to co-ordinate their paddle strokes for maneuvers. In a touring double, there is a center hatch for gear or with a seat for a small child so there is enough room between paddlers that each can paddle at their own pace: no more paddling in sync with the person in front.

We Love Doubles for their Stability & Speed

Modern sea kayaks are loosely based on the designs of the Aleuts and Greenlanders who made skin on frame kayaks for hunting marine mammals in cold ocean conditions. Sea kayaks are much longer and significantly more narrow than river kayaks and recreational or lake kayaks.

The long, narrow hull of a sea kayak is designed for speed and tracking while paddling on the ocean but narrower boats are less stable. At only twenty to twenty four inches wide, single sea kayaks often feel “tippy” and some are easily capsized which is why it is a good idea for serious kayakers to learn to roll their kayak.

Touring double kayaks are much wider (between twenty six and thirty four inches) than single kayaks so they present the perfect combination of speed and stability. With two person paddling power, double kayaks allow us to cover more territory with less effort and the extra stability is great for rough conditions and novice paddlers. 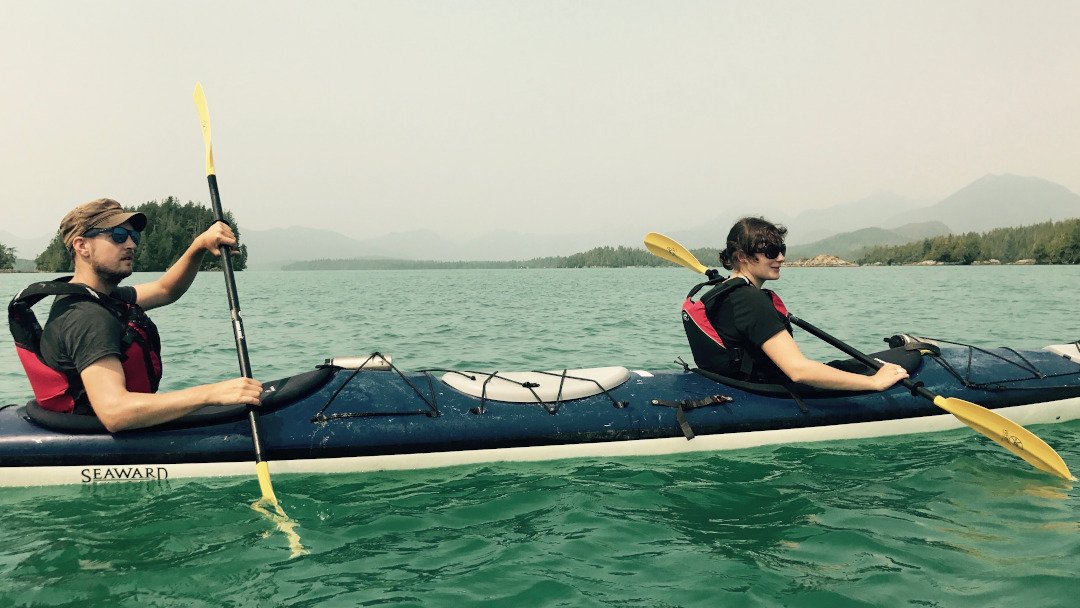 We Love Double Kayaks for Group Paddles and Tours

This is how a lot of Sea Kayaker Magazine’s “Deep Trouble” stories begin: an expert kayaker takes out his friend Bill, who has only paddled once or twice before. Bill is struggling to keep up with his friend when suddenly the wind picks up, the waves build and Bill goes in the water. Poor Bill! If only he were in a double kayak with his expert friend they could have ridden the waves together and laughed at the wind.

Everyone paddles at their own pace and the difference in pace can be frustrating for the speedy group members and exhausting and dangerous for those who are constantly trying to keep up. Doubles are an excellent option for group paddles, especially when there are some group members who are not as experienced as others. Pair a strong paddler with a weaker one in a double and everyone will enjoy their day.

The addition of little humans to a family of avid kayakers poses a challenge. How soon can we get these kids out on the water? With a double kayak, family paddling is easy. Our kids were paddling with us at 18 months, seated on a spare lifejacket in front of us in the cockpit of a double kayak. They got a bit of water dripped on their heads and our trips were short, but our time on the water was sweet and safe.

Double kayaks are stable enough to handle the wiggling of small children, and the larger cockpits make it easier to fit parents with a child in their lap. When they were about 3 years old the boys graduated to their own seats in the kayak: one in the center seat and one in the front. Sometimes they bring paddles, sometimes they don’t, because double kayaks are so wide it is difficult for kids to effectively help with the paddling until they are about eight or nine years old. However, the double kayak with the center seat is easy for one parent to paddle without much help from the kids.

Families with canine “kids” also love double kayaks because the center hatch is a great place for kayaking dogs to sit. If you have a double kayak with a center hatch but no kids seat, a Crazy Creek camping chair works well as a center seat for a child.

We Love Double Kayaks for Camping

For expeditions and camping trips, double kayaks are a great choice to help keep a group together, for covering distance and because touring double kayaks can fit tons of camping gear. The maximum load capacity for a typical double kayak is eight hundred and fifty pounds, which means you can easily fit two people, or two adults and a child in the center and still have plenty of room for camping gear.

The large center and rear hatches on double kayaks easily fit bear canisters (some single kayak hatches don’t fit traditional bear cans.) Many touring single kayaks also have great capacity, they are designed for touring after all, but extra size of the hatches and storage areas in double kayaks mean that you can actually pack larger tents, bigger cook pots and larger sleeping pads than you can in two single kayaks.

The Downside to Double Kayaks

By the way, there is nothing wrong with single kayaks. We love them too. We just think that touring double kayaks are underrated and in many situations they are very handy boats.

The downside to double kayaks? For most people it is not practical to paddle a double sea kayak alone with the front seat empty, although we do know some people who do it. Doubles are designed to be paddled by two people. True touring doubles are also heavy: usually between eighty five and one hundred and five pounds, so unless you are super strong, it takes two people to carry them.

The length and weight of double kayaks makes them difficult, but not impossible, to carry on cars: a good rack with rollers and end tie downs will really help. There are also kayak trailers available that are great for transporting any kind of kayak, but especially helpful for big double kayaks. So if you are looking for a kayak to take places on your car then a double may not be the best choice, but if you are renting kayaks for an expedition taking a first time paddler out, or shopping for a family kayak, ask your local kayak store if you can take a tandem touring kayak out for a test paddle. I think you will be pleasantly surprised.